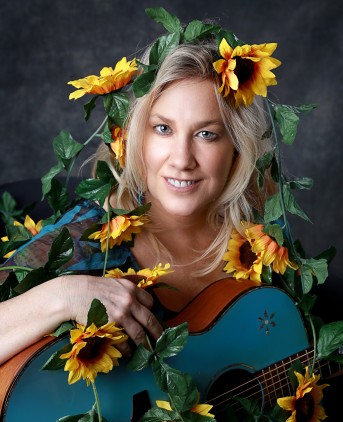 Miss Joanie is an in-demand children’s entertainer and musician who gets tremendous joy from involving children of all ages in an interactive, music making experience they truly remember. She just released her second album, When the Sun Shines which has already won the prestigious Parents’ Choice Award.  Her first album, Miss Joanie’s Potty Party won the Best of Cincinnati Kids’ CD Award in 2007.   Both albums are available through CD Baby, Amazon, iTunes, Spotify, Apple Music, and other streaming sites.

Once upon a time, a little girl wrote in her 4th grade journal, “My favorite singers are John Lennon, Paul McCartney, George Harrison, Joni Mitchell, Randy Newman, and sometimes Jackson Five. When I grow up, I want to be a singer and write my own songs, with a little help from my friends.” That is just what Joanie Whittaker did. According to her mother, she has been singing since the crib and writing songs since the age of nine.

After graduating from high school in Bowling Green, Ohio, Joanie spent three years in Helsinki, Finland, where she became a member of a rock band, Joan Shark and The Finns. The only fluent English speaker, Joanie was given the task of writing all the songs. The band came in 5th in the Finnish Song Contest, the regional showcase for the European Song Contest, which is how ABBA found their fame.

Returning home, Miss Whittaker settled in New York City for 11 years. Joanie taught at the prestigious Calhoun School on the upper west side. As the floating substitute for all grades, she began what was to become a lifelong admiration and respect for children.

It was in New York that she picked up the guitar, and began honing her performing skills in the clubs of Greenwich Village. After settling back in Ohio, Joanie began teaching music to toddlers and preschoolers. While helping a group of little ones potty train, she began making up songs to help with the transition. Another teacher suggested that the songs be put onto a CD. Along with the additional encouragement of fellow Cincinnatian and children’s entertainer Zak Morgan, Joanie did just that, and in 2007 her first children’s album, Miss Joanie’s Potty Party was born.

Playing for kids in and around Cincinnati, Joanie also found time to record and release four albums with her indie rock band, The Cla-Zels, which earned rave reviews. While the band is currently on hiatus, Miss Whittaker is taking time to focus once again on her children’s music. Currently she’s in the studio finishing up her long awaited album, When the Sun Shines, which will be the next step in Miss Joanie’s solid musical career.

Ultimately, she hopes to instill in her audience an understanding of what music can bring to their lives, while demonstrating the value of community. She gets to do this in a sometimes silly, sometimes poignant, but always fun and relatable way. Her shows, which consist of mostly original music, are geared to appeal to kids of all ages as well as the adults who accompany them. Miss Joanie has a strong educational and outreach component to her work having performed for many years in schools and
libraries as often as she has on stage.

“I have learned more from working with children than from anything else in my life,” said Joanie. “My profound respect for kids is the driving force behind so much of how I live my life.”
TESTIMONIALS ABOUT MISS JOANIE
“Miss Joanie was so much fun! She interacted with the children, she was very expressive, and the children responded well to her performance. Her show was very positive and upbeat, constantly moving so the children felt involved. I highly recommend Joanie for your event!”
— JD Hughs, On Air Entertainment

“Joanie brought great enthusiasm and her genuine love of music to our event! She innately knew how to engage all of the children into her performance and ensured that everyone (with or without disabilities) were active participants. Joanie was the highlight of our event!”
— Sarah Fister-Brewer, Chairperson 2q23.1 Awareness Day

“In a sea of dumbed-down children’s CDs, Potty Party — which features guitar, production, art design, and arrangement work from (Jason) Erickson, as well as special guests like local Grammy nominee Zak Morgan and the duo Entheos — stands out. Erickson and Whittaker commandingly utilize a plethora of styles (from ’50’s Rock ’n Roll and Bluegrass to Swing and Reggae), and the songwriting and production is top notch, making it a step above the rote simplicity you’ll find in most kids’ music. “Adult-friendly” is a key selling point these days for kids’ music, and Whittaker says she definitely had
that in mind.” — Mike Breen, Cincinnati CityBeat