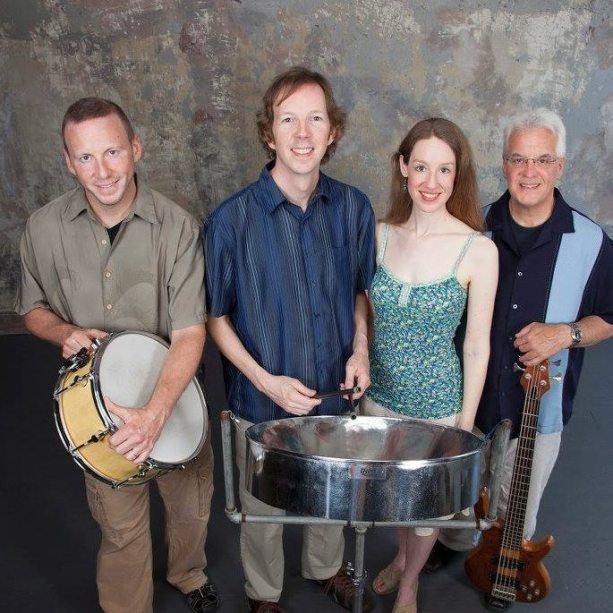 The Bacchanal Steel Band is the Midwest’s premiere Caribbean ensemble, featuring instruments made from 55-gallon oil barrels. Since 1998, Bacchanal has been entertaining and educating with their combination of calypso, soca, reggae, pop, and classical music. The group performs regularly in schools, libraries, concert halls, and for private functions and is in demand regularly at national corporations such as IKEA and Proctor & Gamble. The band has entertained guests on the Asuka II cruise ship in the Caribbean, provided music for JOCKEY at their international convention and opened for the Beach Boys. Their album, Standard, on the Stork record label, features music written for “pan” by the greatest composers of the genre.

Concert programs feature a variety of music, from Belefonte, to Beethoven, to Buffet. Along the way, participants young and old learn how steel drums were invented, how they are made, and how a musical ensemble works together to create beautiful music. The program concludes with audience members joining us as part of the “engine room” for an exciting ﬁnale.

Brian hales from Ohio, and holds a B.M. in Percussion Performance from the University of Cincinnati College Consevatory of Music and Master of Music from Miami University. He has performed from New York, to the Kennedy Center, to South America, and with artists such as Aretha Franklin, Don Rickles, and xylophone virtuoso Ian Finkel. His orchestral engagements include the Kentucky Symphony, Cincinnati Ballet Orchestra, Opera, and Playhouse in the Park. He has performed on cruise ships and at theaters across the U.S. Visit http://www.brianmalone.net

Jennie grew up in Ohio, and earned a B.M. in voice and piano from Ohio University. When not playing steel drum, she travels the country performing musical theatre. She has worked with such companies as Cumberland County Playhouse (TN), Nebraska Theatre Caravan (NE), and SeaEscape Cruiseline (FL). Favorite roles performed include Denise in Smoke on the Mountain, Maria in The Sound of Music, and Nellie in South Paciﬁc. Visit http://www.jenniemalone.com

Bill attended the Berklee College of Music where he studied with Bruce Gertz, and graduated from Indiana University with a Bachelor of Music Education. He currently plays electric and acoustic bass in a variety of musical styles including salsa, Caribbean and Brazilian and jazz. He has performed with jazz notables Jevon Jackson, Steve Wilson, Don Bradon, Red Rodney, and Bill Watrous. He has also performed with steel drum great, Ray Holman, as well as pop acts, Little Anthony and the Imperials, and Patti Page.

Adam freelances as a drummer/percussionist and has worked with a variety of artists and bands including the celebrated Beatles tribute band Savoy Trufﬂe, Eric Jerardi, Stephen Sorrentino, the Shawn Stanley Trio, and the Nick Netherton Band to name a few. He has performed for numerous theatre productions including shows at Cincinnati Playhouse in the Park, Ensemble Theatre of Cincinnati, and Human Race Theatre. His original music was choreographed by the Gem City Ballet. Adam is also a gifted vocalist, performing with the No Promises a cappella vocal ensemble.

“Bacchanal Steel Band’s presentation is consistently clear, well-paced, up-beat and informative. (They) bring the music of Trinidad to the classroom, along with learning the basics of music, and the creation of percussion instruments from recyclables.”

“…a member of our Artists on Tour program…extremely professional, attentive to details, responsible, and good with kids. A very effective program that interests and involves children. The artistic quality is high, the educational value is signiﬁcant, and Brian fulﬁlls his role as a teaching artist successfully.”

“They related extremely well to their varied audiences and made each of their programs fresh and lively. In my six years of bringing arts into the schools, this group deﬁnitely rank as one of the best.”

BACCHANAL STEEL BAND ON THE WEB